Well I credit Deb Steele, Pink’s owner (Kindle’s mom, Hazel’s sister) for getting me to think about setting a goal. I thought Ce qui sera sera, what will be will be. If the shows work out in our schedule, fine. We looked at the calendar and there was a 4 day show in Kansas City MO. I asked Bruce if he wanted go, and he was game. We were married in KCMO, 29 years ago, so thought that would be a fun vacation. Bruce ended up sick as a dog, and Kindle ended up winning a NOHS BIS (National Owner Handler Series, Best In Show)!! 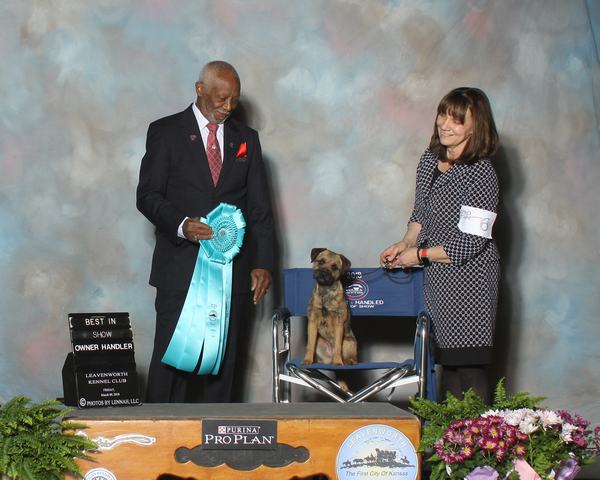 Then Kathy and Margaret Henning invited us down for the Manitowoc dog show, fun time. Then we decided on creating a raffle fundraiser for the 2019 BTCA specialty. All a plus for making a great weekend. To top it off, Kindle won another NOHS BIS! We are ecstatic. 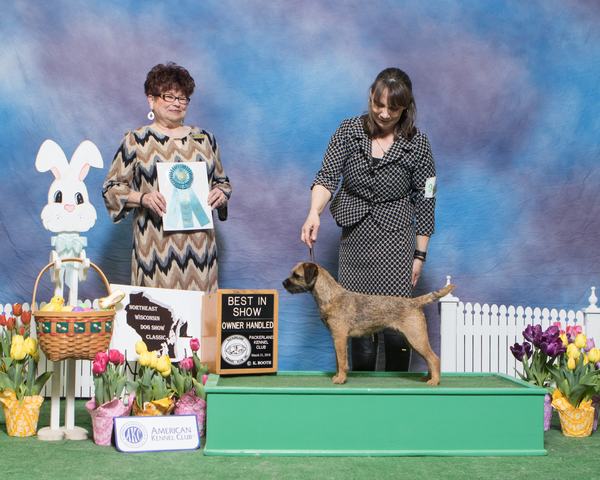 All this happening in just a few weeks.

So now I’m obsessing over the calendar and checking the internet for standings. Exactly what I wanted to avoid. C’est la vie, such is life.

It’s been a few weeks, but I want to record our experience in NY. Kindle and I had an amazing time in New York City. We went with two friends – Jane and Sharon. Great traveling mates. Kindle handled the city like a pro. I paid the $50 to use the dog spa in the basement of the New Yorker. The dog spa had a big area with wood shavings for the dogs to potty. It also had a tread mill and three grooming tables. The first day, Kindle had no problem using it. But after that she didn’t want anything to do with it. I don’t know if it was the fact that more dogs were using it or she just didn’t like the shavings. So I ended up bringing her outside most of the time, looking for some sort of grass or dirt. She got used to pooping on the concrete. In fact once it was in the middle of the street. It was a surprise, so I didn’t have bag ready, and the light was changing. It was a pins and needles experience.

She loved the show, and was a happy girl strutting her stuff. She was pulled for second best bitch, and I thought how exciting. The top bitches in the country were there, and I was excited to be among them. Then when we came to the placings, Mr Micheal Shoreman pointed at Kindle for Best of Opposite. Wow!! It was a fast paced time after that, with pictures and congratulations. All a whirl wind of activity. It was such a great time, now I’m making plans to come back next year. 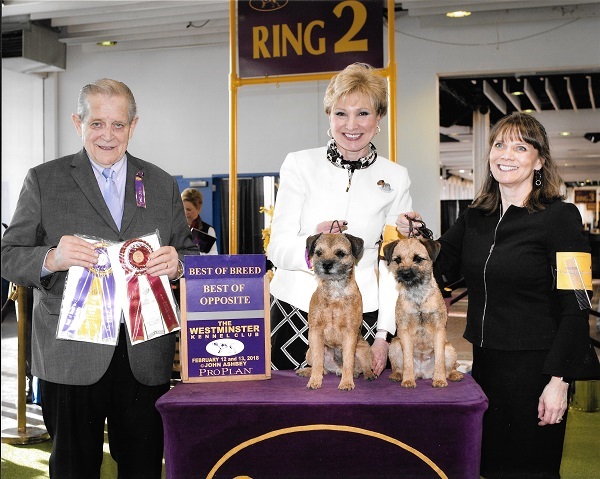 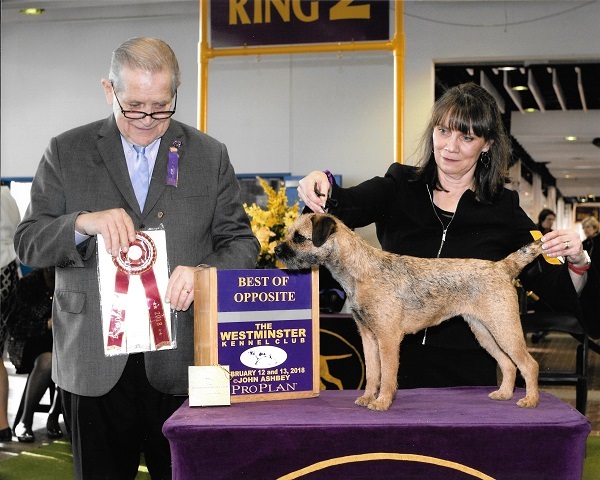 Kindle has had a fantastic 2017.
She had her first show in April in the 4 to 6 month Beginner puppy class. She went on to win Best Beginner Puppy in Show.

First points were 2 three point majors at her first weekend out, at 6 months old. Also got to play in NOHS group ring, and winning a group 3 NOHS.

During our family vacation Duluth Kennel Club dog show, Kindle was the only Border Terrier. So lots of fun playing in the group rings. She won a group 4, 3, and 2 in NOHS Terrier group.

Next was a one day warm up show (for Montgomery) at the Rochester Minnesota Kennel Club in September. She won BOB WB, then went on to win Best in Show Breed By Exhibitor!

Off to the Montgomery weekend shows, where she and her brother won Winners Dog and Bitch at both Hatboro shows, and Devon, with Kindle finishing her championship at Devon going best of winners. Kindle made her debut at the Montgomery Kennel Club dog show, making a respectable showing making the final cut.

Next shows were local shows – Coulee Kennel Club Inc. and Minneapolis Kennel Club and Granite City Kennel club of St Cloud Minnesota. She won Breed at all these shows, plus a Group 2, 3 group Threes, and a group 4. Plus NOHS group 2 and 3.

This resulted in Kindle ending up number 19 in Border Terrier all breed standing.

I’m so happy to have this little girl in my life. She is ZZ’s granddaughter through and through. She has started agility and is a quick learner. She’s discovered earthdog, and loves the game. She also watches TV, just like ZZ.

Kindle – Meadowlake Rekindled Spark of Gusto – has joined our crew. Born on Thanksgiving 2016. She is full of energy and loves to play with Henri. Hazel will play occasionally with her. We have high expectations for her in both conformation and performance. She is out of GCHP Meadowlake Dark Side of the Moon and CH Gusto Glitter in the Air at Meadowlake JE, NA, NJ, FDCH 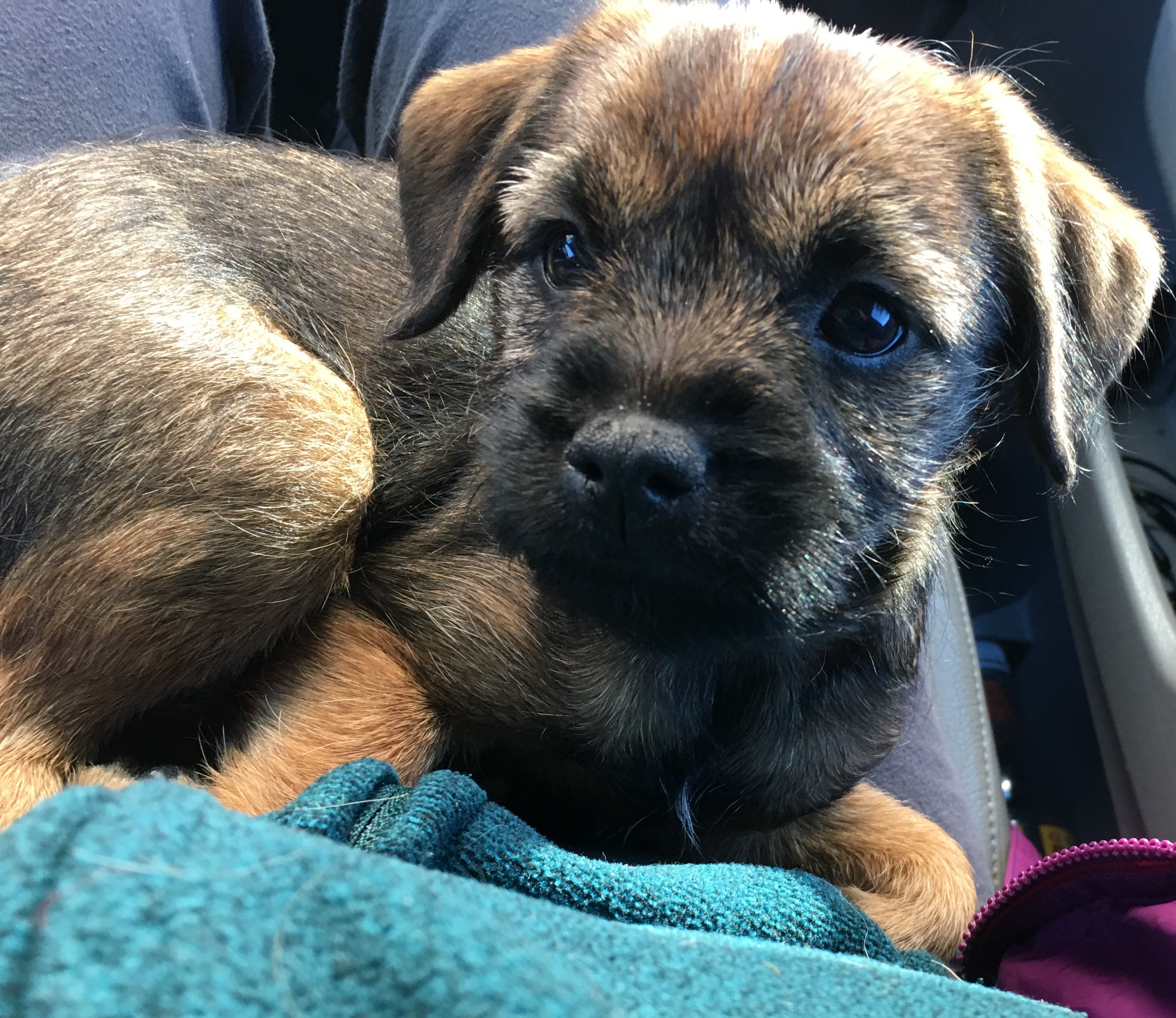 Check out our new ad in Showsight

Go to page 249 in the September issue of Showsight magazine to see Hazels beautiful ad. http://www.showsightmagazine.com/digital-issue

Or take a look right here 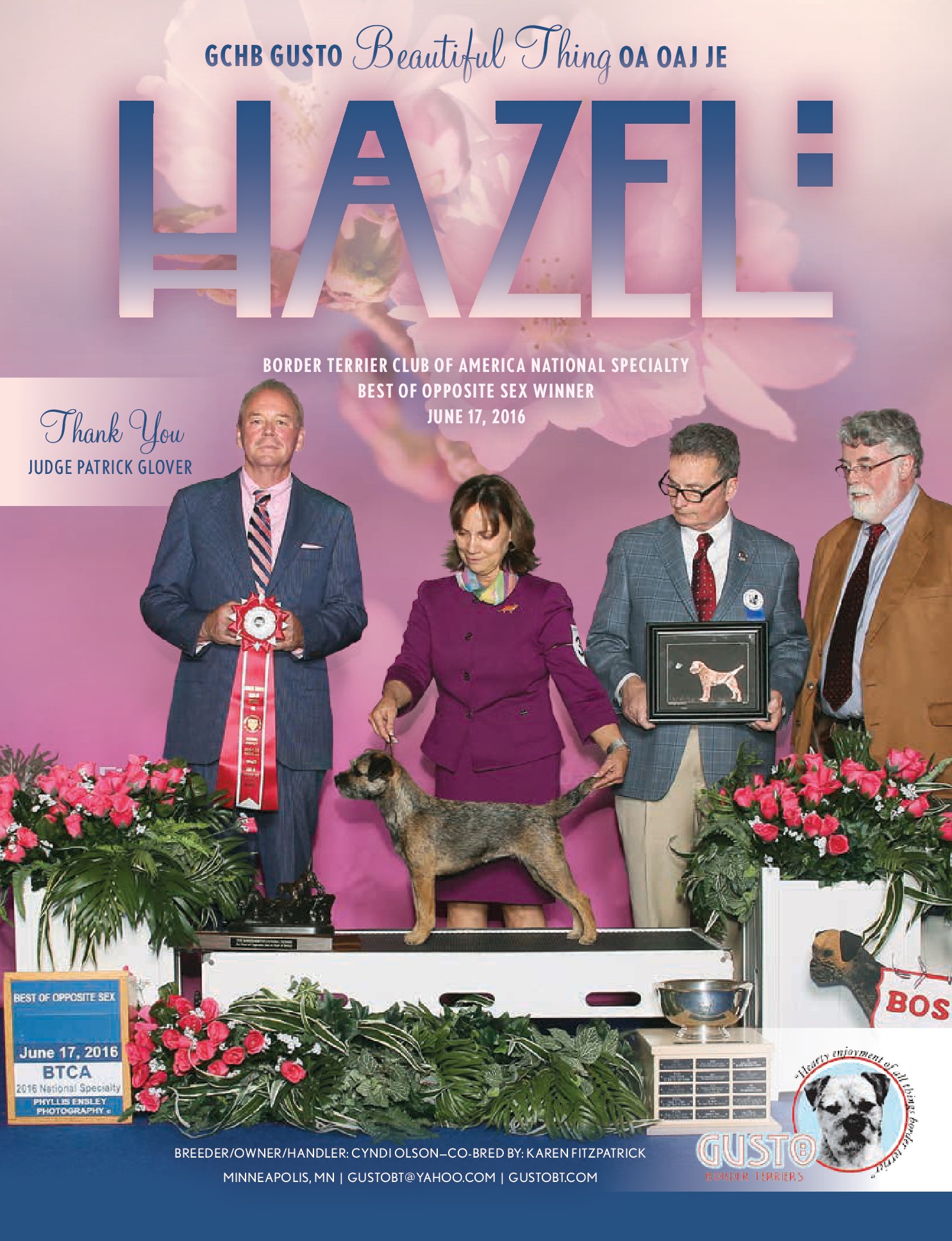 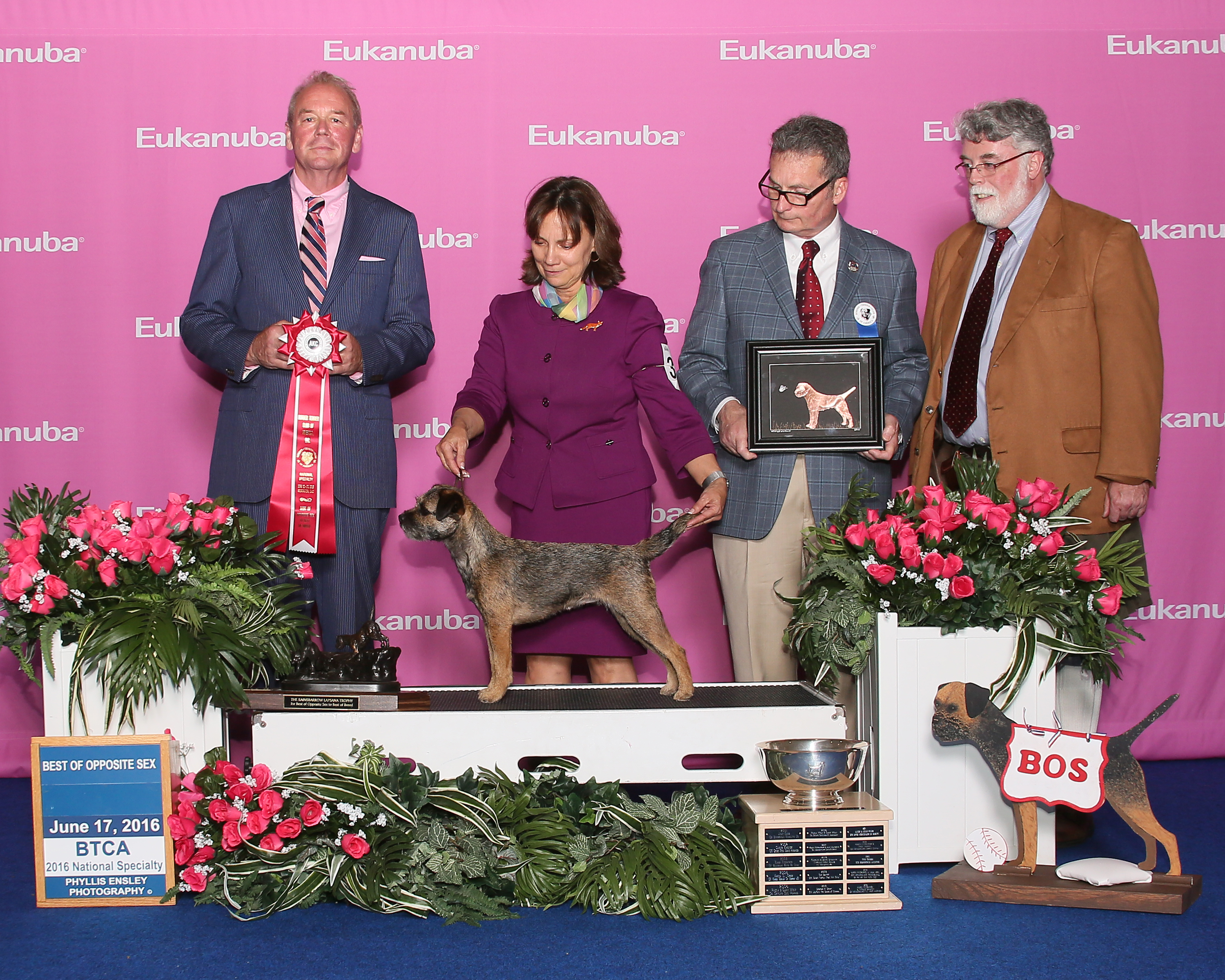 So excited Hazel won Best of Opposite!! winning over 100 specials. Thank you judge Patrick Glover!

Sorry I should have posted earlier, I have not posted on my web site since announcing Hazel qualified for National Owner Handlers Series championship. We were planning on going to Orlando FL. However 3 weeks ago Hazel was diagnosed with Leptospirosis. This requires her to be on antibiotics for 4 to 6 weeks, and not come in contact with other dogs. We will not be in Orlando. We wish everyone successful show, and has a great time. 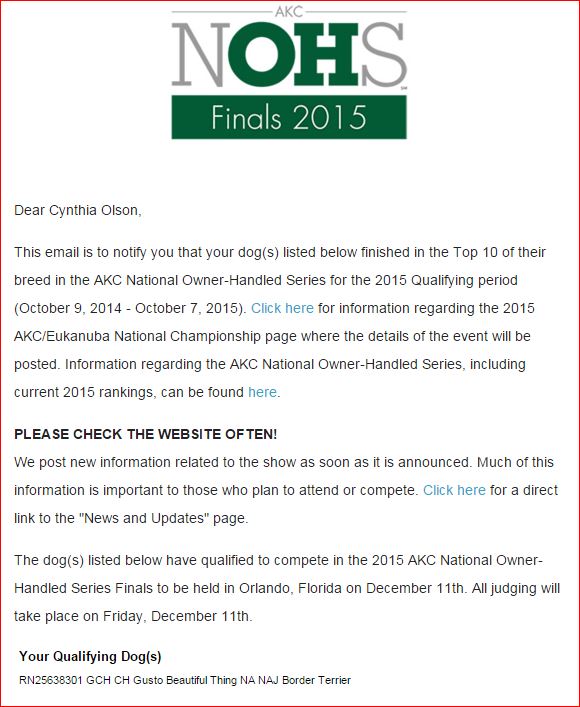 Hazel had her debut in a print magazine this month, Showsight. It was fun to create with the staff at Showsight. Thank you for their patience and creative insight. I figure this will be the only time I will have a dog in the top 5 rankings of anything, so why not. I think it turned out beautifully. Check out page 205 (digital) or 201 (hardcopy) 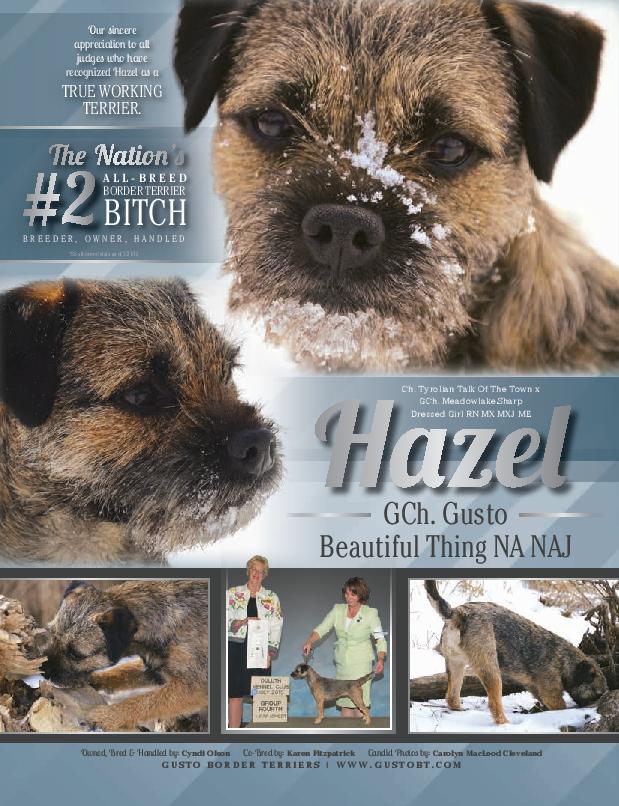